For over 100 years, the Planck Length was virtually ignored.  That length was so small, it seemed meaningless.¹  Nothing and nobody could measure it.  It was just a ratio of known constants.  Yet, it created a conceptual limit of a length which gave a New Orleans high school geometry class a goal or a boundary beyond which they did not have to go.  Recent measurements from the Hubble telescope provided the upper limit so this class could define the number of base-2 exponential notations from the smallest measurement of a length to the Observable Universe, the largest.

Within that continuum everything can be placed in a mathematical and geometric order.  Everything.  That is, everything in the known universe. The most remarkable discovery was that it took no more than 205.1 base-2 exponential notations.  It would be our very first view of an ordered universe. And, it readily absorbed all of our worldviews.

That was December 19, 2011.  Formally dubbed, “The Big Board – little universe,” we then asked, “What does it mean?  How do we use it?”  When we engaged the experts, they appeared a bit puzzled and seemed to be asking, “Why haven’t we seen this chart before?” Those who knew Kees Boeke’s 1957 book, Cosmic Vision,  asked, “How is it different from Boeke’s work using base-10 exponential notation?”   That was a challenge. Our best answers to date – it’s more granular, it mimics chemical bonding and cellular reproduction; it’s based on cascading, embedded, and combinatorial geometries – were not good enough.  In April 2012 even the Wikipedia  experts  (Steven Johnson,  MIT) protested.  He classified our analysis as  “original research” and within a very short time our Wikipedia article was taken down.  Others called it idiosyncratic (John Baez, UC-Riverside), but they did not tell us what was wrong with our analysis.

“Let’s just make as many observations as we can to see what can we learn?”  A NASA senior scientist and a French astrophysicist helped us with our calculations.  Their results gave us a range; the low was 202.34 notations and the high, 205.11.  We could identify many things between the 66th notation and the 199th notation.  But, there were blanks everywhere so we got busy speculating about them. The biggest group of empty notations was from 2 to about 65. We asked, “Conceptually, what could be there?”  Max Planck may have given us a clue when in 1944, in a speech in Florence, Italy; he said, “All matter originates and exists only by virtue of a force which brings the particle of an atom to vibration and holds this most minute solar system of the atom together. We must assume behind this force the existence of a conscious and intelligent mind. This mind is the matrix of all matter.” (The Nature of Matter, Archiv zur Geschichte der Max-Planck-Gesellschaft, Abt. Va, Rep. 11 Planck, Nr. 1797, 1944)  Matrix is a good word. Throughout history others have described it as the aether, continuum, firmament, grid, hypostases, plenum and vinculum.

We made two columns and within the top notations, 100-to-103, we found humanity.  That seemed politically incorrect until we discovered the cosmological principle that the universe is isotropic and homogeneous.  So, if it is true for us, it would also have to be true for “everybody” anywhere in the universe.

This is high school.  We had been following embedded geometries, particularly the tetrahedron and octahedron.  We observed a tetrahedral-octahedral-tetrahedral chain.  In no more than 206 layers everything in the universe is bound together.  We learned about tilings and could see that the four hexagonal plates we discovered within the octahedron also created tiles in every possible direction.

“What is this all about?  Just what’s happening here?”

We knew we were imposing a certain continuity and order with our mathematics (base-2 exponential notation), and we were also conveying certain simple symmetries and relations with our geometries.  That wrapped our work within a conceptual framework that was quite the opposite of the chaotic world of quantum mechanics.  Our picture of the known universe was increasingly intimate and warm; it was highly-ordered and had immediate value. And the more we looked at it, the more it seemed that all of science and life had an inherent valuation structure.   Here numbers became the container for time, and geometries the container for space.  How each was derived became our penultimate challenge. Ostensibly we had backed into a model of the universe and somehow we began to believe that if we could stick with it long enough, it just might ultimately give us some answers to the age-old question, “What is life?”

We had strayed quite far from those tedious chapters in our high school geometry textbook.  Yet, we also quickly discovered how little we knew about basic structure when we attempted to guess about the transitions from one notation to the next.  We asked, “How can we get from the most-simply defined structure, a sphere, to a sphere with a tetrahedron within it?”  We needed more perspective.

“Who is doing this kind of work?”  We began our very initial study of the Langlands Program and amplituhedrons. Then, we walked back through history, all the way to the ancient Greeks and we found strange and curious things all along the way. There were the circles of Metatron that seemed to generate the five platonic solids. “How does that work? Are there experts who use it?  How?”  We still do not have a clue.  All the discussions about infinitesimals seemed to come to a crescendo with the twenty-year, rancorous debate between Thomas Hobbes and John Wallis.  It was here that we  began to understand how geometry lost ground to calculus and algorithms.

The Big Board-little universe was awkward to use.  It was five feet tall and a foot wide.  Using the Periodic Table as a model, an 8½-by-11 chart was created and quickly dubbed, The Universe Table.  It would be our Universe View into which we could hopefully incorporate any worldview.  It was an excellent ordering and valuation system. 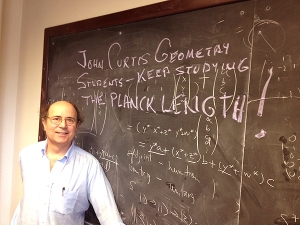 Though the Planck Length became a natural unit of measurement, a limit based on known universal constants, it wasn’t until Frank Wilczek of MIT opened the discussion did things really begin to change. In an obscure 1965 paper by C. Aldon Mead, his use of the Planck Length was pivotal. In 2001 Wilczek’s analysis of Mead’s work and their ensuing dialogue was published in Physics Today. Wilczek, well on his way to obtaining a Nobel Prize, then began writing several provocative articles, Scaling Mt. Planck.  Even his books were helpful. In January 2013 he personally encouraged us on our journey.

In 1899 Max Planck began his quest to define natural units.  At that time he took some of the constants of science and he started figuring out natural limits based on them. There are now hundreds that have been defined. Each is a ratio and each can be related to our little chart and big board.  The very nature of a ratio seems to be a special clue. It holds a dynamic tension and suggests that the relation is primary and all else is derivative.

We have a lot of work in front of us!  And, we are up for the challenge.

Who would disagree with the observation that our world has deep and seemingly unsolvable problems?  The human future has become so problematical and complex, proposals for redirecting human energies toward basic, realizable, and global values appear simplistic.  Nevertheless, the need for such a vision is obvious. Rational people know that there is something profoundly missing. So, what is it? Is it ethics, morality, common sense, patience, virtues like charity, hope and love?  We have hundreds of thousands of books, organizations and thoughtful people who extol all of these and more.  The lists are robust.  The work is compelling, but obviously none of it is quite compelling enough.

First, it has to be simple.  Our chart is simple.

Second, it has to open up to enormous complexities. Using simple math, by the tenth notation there are 1024 vertices. We dubbed it the Forms or Eidos after Plato. The 20th notation would add a million vertices; we called it Structure. The 30th adds a billion new vertices. We ask, “Why not Substances?” The 40th adds a trillion so we think Qualities. The 50th adds a quadrillion vertices. We speculate Relations. By the 60th notation there are no less than a total of 2 quintillion vertices with which to create complexity. We speculate Systems and within Systems there could be The Mind. As if a quintillion vertices is not enough, the great physicist,  Freeman Dyson, advises us that really we should be multiplying by 8, not by 2, so potential complexity could be exponentially greater.

Three, it should be elegant.  There is nothing more elegant than complex symmetries interacting dynamically that create special harmonies.  We can feel it. And, we believe the Langlands program and amplituhedrons will help us to further open that discussion.

What is life?  Let us see if we can answer very basic questions about the essence of life for a sixth grade advanced-placement science class and for very-average, high-school students.  These are our students.  The dialogue is real.  The container for these questions and answers is base-2 exponential notation from the Planck Length to the Observable Universe.  To the best of our knowledge, December 19, 2011 was the first time base 2 exponential notation was used in a classroom as the parameter set to define the universe.  Though our study at that time was geometry, this work was then generalized to all the scientific disciplines, and more recently it was generalized to business and religion.  So, as of today, readers will see, and possibly learn, the following:

1.  See the totality of the finite, highly-ordered, profoundly inter-related, very-small universe where humanity is quite literally back in the middle of it all.

2.   Engage in speculations about the Infinite and infinity whereby the Creative and the Good take a prominent place within the universal constructs of Science.

3.   Extend the scale of the universe by redefining the Small Scale and engaging in speculations about the deep symmetries of nature, giving the Mind its key role within Systems, and demonstrating the very nature of homogeneity and isotropy.

4.   Adopt an integrated universe view based on Planck Length and Planck Time such that Science, Technology, Engineering and Mathematics are demythologized,  new domains for research are opened, and philosophies and religions are empowered to be remythologized within the constraints of universals and constants.

People ask, “Aren’t you getting ahead of yourself?  Isn’t this a bit ambitious?”  The concepts of space and time raise age-old questions about who we are, where we have come from, and where we are going.  With our little formulation, still in its infancy, we are being challenged to see life more fully and more deeply.  And so we reply, “What’s wrong with that?”

1  http://www.phys.unsw.edu.au/einsteinlight/jw/module6_Planck.htm   Physics professor, Joe Wolfe (Australia), says, “Nothing fundamentally changes at the Planck scale, and there’s nothing special about the physics there, it’s just that there’s no point trying to deal with things that small.  Part of why nobody bothers is that the smallest particle, the electron, is about 1020 times larger (that’s the difference between a single hair and a large galaxy).