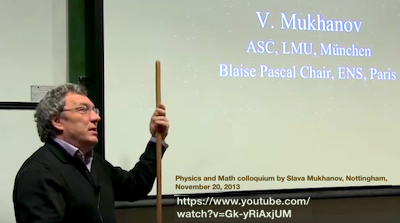 Prof. Dr. Viatcheslav Mukhanov, a Russian theoretical physicist and cosmologist now working in Munich at the Ludwig Maximilian University, is best known for the theory of Quantum Origin of the Universe Structure. He is pictured here in November 2013 giving a lecture at the University of Nottingham, England.

Back before the big bang became dominant, David Bohm instructed me about quantum fluctuations.1 It was 1977. We didn’t ask about the initial fluctuations. I am glad that you have done so and that you have mapped a spectrum of inhomogeneities in the Universe based on temperature fluctuations of the CMBR.2

Though your theoretical predictions are in agreement with this mapping, does it necessarily follow that the galaxies originated from those fluctuations? Cosmological perturbation theory3 doesn’t make it so.

The finite-infinite relation is conspicuously removed. Renormalization doesn’t remove it; it accommodates our calculations (as does regularization).

Now, we have backed into a rather unusual systematic ordering or the universe using base-2. It is not to be confused with Kees Boeke (1957) and ‘t Hooft (2015) who both used base-10.  The base-2 scale has just over 200 notations from the Planck Time to the Age of the Universe. Planck Length and the other base units track well with time. You will see at the 67th notation, the length now begins to accommodates particle physics.

The most mysterious group within this Planck-scale progression are the first 67 notations. The next 67 notations are fascinating to watch the numbers progress at each doubling from the infinitesimals to the gargantuan.

Of course, we have jumped quickly and rather recklessly in our own special ways. Frank Wilczek, Freeman Dyson, and an entire host of thought leaders have not been able to formulate a reason to ignore these simple numbers.

What do you think? Is it worth some time to pursue these numbers with even more questions and possibly more discovery?

I thank you for your work, and now, for your precious time to consider our work to see in what ways it might be related.

PS. These footnotes are for my readers who may be as unfamiliar with these terms as we were when we began this study.  We still have a long way to go; there is so much to learn.

1 Bohm, Causality & Chance in Modern Physics (1957) and particularly focused on pages 163-164 where he said:  “Thus, in the last century only mechanical, chemical, thermal, electrical, luminous, and gravitational energy were known. Now, we know of nuclear energy, which constitute a much larger reservoir.  But the infinite substructure of matter very probably contains energies that are as far beyond nuclear energies as nuclear energies are beyond chemical energies.  Indeed, there is already some evidence in favour of this idea.   Thus, if one computes the “zero point” energy due to quantum-mechanical fluctuations on even one cubic centimetre of space, one comes out with something of the order of 1038 ergs, which is equal to that which would be liberated by fission of about 1010 tons of uranium.”
2 Cosmic Microwave Background Radiation (CMBR)
3 Cosmological perturbation theory